I found Ta Bea by reading Hannah McKnight, who has a new blog.

Email ThisBlogThis!Share to TwitterShare to FacebookShare to Pinterest
Labels: even better than the real thing, global gurls, head to toe perfection


Another shot. There are a couple more on her Instagram page.

Email ThisBlogThis!Share to TwitterShare to FacebookShare to Pinterest
Labels: even better than the real thing, head to toe perfection, missing persons, night on the town

You can find a closeup of the patriotic dress on Jade Jolie's Instagram page:

I stayed in drab, but found these lovely gurls on Instagram:

Email ThisBlogThis!Share to TwitterShare to FacebookShare to Pinterest
Labels: even better than the real thing, Halloween, head to toe perfection, holidays, seasonal

Oops, I'm late in posting this, as World Ballet Day was October 4. In honor of the occasion, how about a couple of new pics of dancer Chase Johnsey (aka Serenity Lopez or Yakatarina Verbosovich)?


Sometimes you wanna be Grace Kelly for a day :) #drag #dragqueen #gown #wig #makeup #jewelry #gracekelly #gay #rpdr
A photo posted by Chase Johnsey (@chasejohnsey) on Oct 6, 2016 at 7:48am PDT


Next, a brief video:


And, finally, a longer video:

Email ThisBlogThis!Share to TwitterShare to FacebookShare to Pinterest
Labels: dancing, drag, even better than the real thing, video

It may be my imagination, but it appears that Dixie Lynn Cartwright has toned down the eye makeup and acquired some lovely new wigs and dresses.

She's more beautiful than ever.


When in doubt, touch that growth on your neck and smile.
A photo posted by Dixie Lynn Cartwright (@dixielynncartwright) on Sep 20, 2016 at 4:55am PDT

Get your butt to the Uptown Underground now!
A photo posted by Dixie Lynn Cartwright (@dixielynncartwright) on Sep 30, 2016 at 5:01pm PDT

Email ThisBlogThis!Share to TwitterShare to FacebookShare to Pinterest
Labels: Chicago, drag, even better than the real thing, head to toe perfection, legs, singer

I've been reading about all-male theatrical productions, which often feature the work of William Shakespeare. That's unsurprising as it basically reflects an attempt to produce the Bard's work in a way consistent with its original form.


The Washington, DC, Shakespeare Theatre Company is a prominent center for all-male productions. Here are a few pictures from their recent staging of "Taming of the Shrew."


#Repost @maulikpancholy #STCShrew ・・・ "My tongue will tell the anger of my heart, or else my heart concealing it will break..." Final weekend #allmale #TamingOfTheShrew @shakespeareindc
A photo posted by Shakespeare Theatre Company (@shakespeareindc) on Jun 24, 2016 at 1:19pm PDT

Rick Hammerly as the Widow:


#Repost @rickhammerly ・・・ Greeting from Padua! The Widow is realized. Goals include a wealthy suitor, doubling for Stockard Channing & a role on MOB WIVES. @shakespeareindc #STCShrew
A photo posted by Shakespeare Theatre Company (@shakespeareindc) on May 12, 2016 at 8:26am PDT


#Repost @katebydesign ・・・ Loved it so much the first time, I had to return to see it again! Taming of the Shrew @shakespeareindc #STCShrew
A photo posted by Shakespeare Theatre Company (@shakespeareindc) on Jun 22, 2016 at 3:12am PDT

The Democratic Party is meeting in Philadelphia this week to nominate Hillary Clinton as its presidential candidate. This will be an hiserstoric moment.

If Hillary wins, the "first lady" will be a man.

In anticipation of this possibility, LGBT activist Santiago Durazzo has been dressing and campaigning as "First Lady Bill" for months. His picture (in costume) has been featured in the Washington Post and other news outlets.

Comparing the current caricature pics to the website photos, it appears Durazzo may have trimmed some of his leg hair for the DNC.  Good to know he dresses for special occasions.

#DemConvention day 2 & we ran into #FirstLadyBill, who wants gender equality in the White House. (Us too, Bill 😘.) pic.twitter.com/ojSpQS0bud
— CafeMom (@cafemom) July 26, 2016

Have you ever seen anything quite like this story about Japanese baseball players who dressed as gurls to "amuse fans!" This video is embedded in the story.

Decided to reflect on my growth as a cosplayer today and dug deep into my computer (photobooth to be specific) and found quite a few gems, and holy crap I sure have come a long way. Never stop learning, my friends! I've come so far as a cosplayer and I can't wait to see how my skills change farther up the road ✨💙✨ it sounds cliche but I encourage you to NEVER give up, because no matter what your skill sets are you can constantly improve upon them and grow. We all start somewhere! 😊 Now I challenge all my Cosplay, artists, and MUA friends to post something similar! "Change is inevitable, growth is optional" so go on and be proud of how far you have come!
A photo posted by TheOfficialAriel (@theofficialariel) on Jun 4, 2016 at 12:33pm PDT


For years, Richard Schaefer's tumblr Ariel's Grotto has been in the right-hand bloglist. You can see his cosplay evolution in the above images.

This past month, Ariel has been the subject of much publicity -- pieces in Cosmo online, The Daily Mail, The Huffington Post, The National Enquirer, etc. That's the kind of attention that helps yield 158,000 followers on Instagram!

Got a long list of ex-lovers, they'll tell you I'm insane 😏💋 Congrats, Queen @taylorswift #dontsueme
A photo posted by TheOfficialAriel (@theofficialariel) on Feb 16, 2016 at 2:22pm PST


Mostly, as the stories report, Richard goes in for Disney princesses. Here are some faves:

It's hard to explain. Lizards and pumpkins and things! ✨✨✨
A photo posted by TheOfficialAriel (@theofficialariel) on Jun 23, 2016 at 10:13am PDT


I must say, I really felt quite distressed at not receiving an invitation 💚😈💚
A photo posted by TheOfficialAriel (@theofficialariel) on Jun 7, 2016 at 2:56pm PDT Rupaul veteran Ben De La Creme makes a fabulous pin up gurl. I couldn't decide which of these pics to put first as DeLa looks gorgeous in all of them. 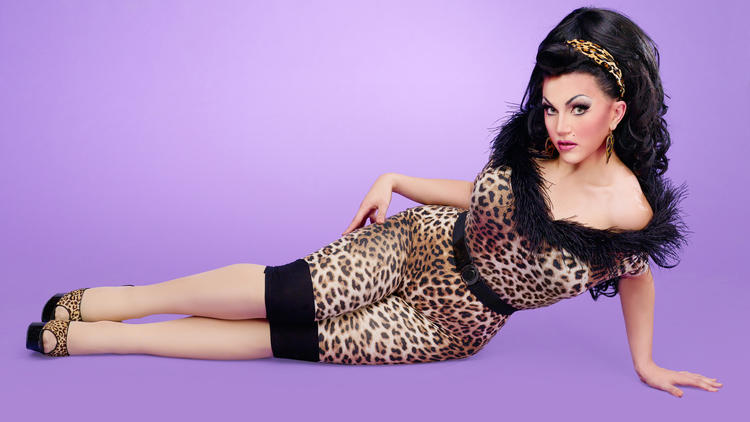 RIP Alanis Laurell (Ross), one of the 49 victims at Pulse.

Her artistry is apparent on any number of videos on youtube.

Are you familiar with the photographer Yasumasa Morimura? He does self-portraits in the guise of famous people and iconic photos.

I check my Flickr account about once per week. It's always a good morning when I find new pics of Gina Lee. Though she's outdoors in the sunlight, she's ready here for a night on the town:

And covergurl Vesna from Prague poses like a studio model: 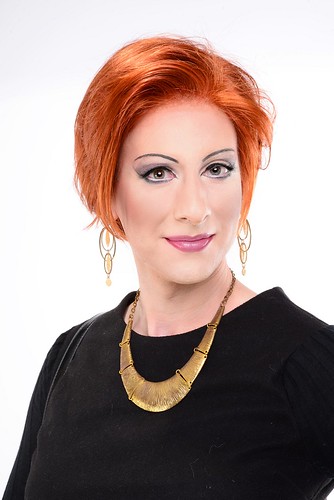 Email ThisBlogThis!Share to TwitterShare to FacebookShare to Pinterest
Labels: even better than the real thing, global gurls, head to toe perfection, model, night on the town

This is Jerzy Grzechnik performing as Diana Ross on the Polish television program Twoja Twarz Brzmi Znajomo. How do we feel about the blackface?

Jerzy has already appeared on the show as Adele and Britney Spears.
Posted by elle at 7:38 AM No comments:

He also tweeted about it:


Her boyfriend Kyle is a cosmetologist!


Chasity has posted plenty of pictures of herself in gowns, but I think this is an even better full-body shot:

Email ThisBlogThis!Share to TwitterShare to FacebookShare to Pinterest
Labels: beauty contest, drag, even better than the real thing, gurl next door, head to toe perfection

From a TV show in Paraguay, I think:

Alena Mnsk is a beautiful gurl from Belarus who used to have a popular channel on youtube. Some of her videos are still available, but they have apparently been posted by other users (who presumably copied them). 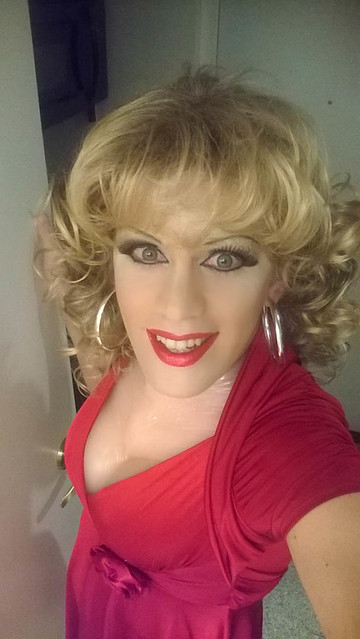 I think Alena was last featured here in 2009.

The Hungarian TV show Sztárban Sztár is yet another version of Your Face Sounds Familiar. As I wrote a couple of weeks ago, it is not always easy to find performances from global editions of this program on youtube. My guess is that this problem is related to copyright. Perhaps the programs make deals to utilize songs, but the deals restrict access in the USA?

For whatever reason, I cannot find the performance of Peter Srámek as a gurl.  They might as well be secret. Luckily, however, pictures are available.

I'm not sure I know this artist, but I believe she is Judit Hernádi.

Apparently, this is supposed to be an imitation of the leggy Tina Turner:

I believe young Peter also performed as Boy George and as a member of the Spice Girls.
Posted by elle at 9:17 AM 1 comment:

I spend a good deal of time on youtube looking for singing videos from the television show "Your Face Sounds Familiar." It is known by various names in different countries around the world. It can be frustrating to find new videos.

The Romanian version, called "Te cunosc de undeva!" is known for its terrific impersonators, but many of the very best performances seem to be unavailable on youtube. The most recent entire season seems to be blocked from viewers in the USA.

Here are a few pics of a couple of the best femulators singing.

Florin Ristei has performed often as a gurl: