Me and Butterfly
Originally uploaded by whitneyarner
This weekend, I noticed a young couple obviously dressed for their high school prom. Naturally, that led my curious mind to the internet where I found at least one cd couple who apparently attended a prom together in 1999 (happy 10 year anniversary to the lovely couple). The photo depicts Whitney and "Butterfly." At Whitney's Flickr page, you can find a spread of a dozen photos of "My Drag Prom."
Posted by elle at 12:10 PM 1 comment:

Where in the world is...

Michaels played the teacher in the Aerosmith video "Livin' on the Edge" (appearing at about 3:00 into the video and again at around 5:50) and as Eric/Erica in the Gary Busey movie "Rough Draft" (also known as "Diary of a Serial Killer"). I think Michaels appears at about 1:04 of this clip. Here's a video capture of that moment: 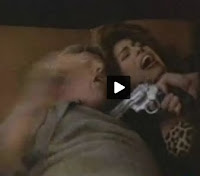 The IMDB page for Michaels seems to be a blend of information from two performers with the same name.

Does anyone know whatever happened to David Michaels?
Posted by elle at 5:49 PM 3 comments:

Are these the same women? 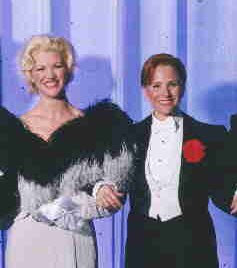 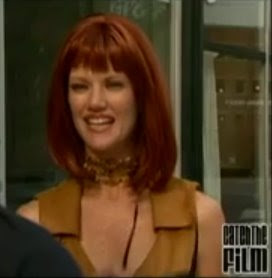 It's about four bumbling mobsters that face an identity crisis when they discover their fantasy woman is packing more than a garter under her mini-skirt. This "Tootsie meets The Sopranos" film features John Fiore (Brotherhood, The Sopranos), Lou Martini, Jr. (Law and Order SVU, The Sopranos), Tony V. (Brotherhood) and Nino Pepicelli (Stiffs).

The description is kind of similar to "Mob Queen," which I've never seen.

The fantasy woman's character is named "Abra Parkhurst," and she's pictured in the movie above, at left.

I viewed the opening credits in Part I and learned that only one other actor/actress is not identified in the paragraph quoted above -- Tara O'Brien. Here's what I found out after a search:

The actress found out about casting opportunities in Broadway's Victor/Victoria from an ad in Backstage. However her agent could not get her an audition.

"So I went to the open call and I went as a man. I didn't really think I was being that clever, but I was the only person there really dressed as a guy," she explains. "You had to do eight bars of your biggest belt. So I sang the eight bars in the Neil Simon Theatre in the dark. Then a voice barked out from the darkness, `Sing the whole thing.' So I sing and this lone applause comes out of the darkness. Out of that darkness walks Blake Edwards and he said: `Well that was good and you look like a guy. Can you walk like a guy?' So he had me walking across the stage as a man."

The photo on the right above is Tara O'Brien (she's on the left with Anne Runolfsson playing the title character) touring with "Victor/Victoria" in 1998. Obviously, she wasn't playing the gender-bending lead role at that time. Is this the same woman?

Does she take requests?

How about Princess Di?

Wonder Woman?
Posted by elle at 1:52 PM No comments:

Email ThisBlogThis!Share to TwitterShare to FacebookShare to Pinterest
Labels: costume, even better than the real thing, fantasy, global gurls

Is it possible to miss someone that you don't really know?

For years, I've appreciated the beauty of Natalya Sereshka on the internet.

Her old website no longer has a complete set of photos, but it used to have a great collection. Yahoo has changed its service so much, that her page doesn't really have any information or photos. I read along as she dipped a toe into blogging -- but that didn't seem to be for her.

Naty hasn't updated her flickr pics since just before Halloween

Perhaps Nata1ya is most active at myspace, but her private profile excludes the curious outside world.

I miss the public Natalya!
Posted by elle at 11:51 AM No comments: