Since I was a youngster, I've been infatuated with TVs on television. Lately, I've noticed that some members of the "Whitest Kids You Know" cast can make quite fetching women: 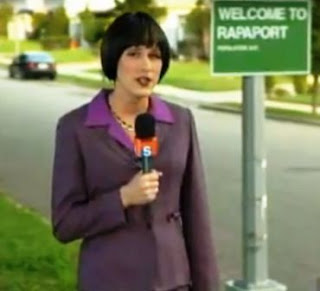 That image is a screen capture from this video, "You've Been Yellow Mustard-ed."

I had a very close friend in college with almost exactly that hairstyle.


Update: I'm probably going to make a series of posts on "TVs on TV." My earliest firm memory of a drag character was Dick Shawn in 1968 as Laura Winthrop on "The Lucy Show." The episode was "Lucy and the Pool Hustler," but I cannot find an image.
Posted by elle at 2:35 PM

Email ThisBlogThis!Share to TwitterShare to FacebookShare to Pinterest
Labels: TVs on TV